Attendees: What happens if an attendee skips networking?

When an attendee skips networking, they will have some limitations and will be encouraged to start networking.

When joining an event in Brella, all participants will be asked if they'd like to Start networking or Skip networking. 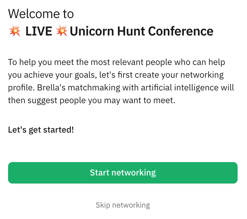 When a participant clicks on Skip networking, s/he will have access to the schedule of the event, sponsor's virtual booths, speaker's biographies, and other content available. However, they will have some functionality limitations, including:

⭐ Tip! A way to motive participants to opt-in in networking is by sending them an email and explain to them why this is so important. They shouldn't let go of the chance to make meaningful connections at your event! Read more here.